This letter is being extended to express our deep concern about the issue of protecting natural values, a fundamental concern which affects all of us. As civil society organizations, who have a duty to act in cases of destruction plans in protected areas, we recognize the role that wetlands, such as ‘’Vjosa-Narta’’ Protected Area, play on protecting biodiversity and ensuring ecosystem services.

‘Vjosa-Narta’ is one of the most important sites in the whole Mediterranean - Black Sea Flyway, where thousands of birds that breed in your country, stop-over twice a year in their way to the wintering grounds in Africa. However, a serious threat is posed to this important wetland from the Albanian government. There are intensive infrastructure development plans for constructing an international airport and touristic resorts, that will irreversibly damage the natural values of the area, hence, it affects the biodiversity of your country and the entire continent.

However, it is with deep concern that we inform you that, in spite of the clearly articulated concern and the joint efforts of many national and international institutions and academics to show that such plans would damage the natural heritage of the site, the Albanian government is not backing away from the plans to develop this infrastructure within the protected area. On 5th of March 2021, the Albanian government announced the winning company publicly, with the promise of the construction work to start very soon. The announced plan is to build in this area the largest airport in Albania, including a cargo service, an aircraft maintenance sector and a mass tourism complex and marina on the seaside of the protected area.

Based on the information available so far, neither a Strategic Environmental Assessment (SEA) nor an Environmental Impact Assessment (EIA) have been carried out for the construction of Vlora International Airport in this area. This concern was also highlighted in the EU country report 2020, where it was clearly stated that immediate measures must be taken to review and improve environmental and strategic impact assessments on existing and planned projects, plans and programmes, especially in construction and tourism.

We would like to bring to your attention the importance that this site has on the national and international level. Vjosa-Narta is a protected area in Albania with the status Protected Landscape/Seascape (IUCN Category V). Furthermore, it is recognized as important for nature and biodiversity on an international level being:  (i) an Important Bird and Biodiversity Area; (ii) a global Key Biodiversity Area, (iii) a Candidate Emerald site and (iv) a candidate for a proposed Site of Community Importance.

The Albanian government has been consistently ignoring our calls for the reconsideration of these plans within the protected area. Lately, our coalition of national and international organizations working for nature conservation in Europe has sent an open letter to Prime Minister Edi Rama on February 1st, 2021, which was again ignored. No consultations or discussions with the main nature conservation actors and experts in Albania have taken place in the project planning phase and the selection of the location for the future airport.

We consider your support in joining our cause, that the airport within Vjosa-Narta Protected Area conflicts with national laws and international biodiversity agreements, and send a notification to the Albanian government to reconsider its constructions plans in this area.

We are convinced that with your support the Albanian government will reconsider its decision and prioritize nature conservation over intensive development within the protected area.

Please your Excellency, accept our distinguishing gratitude for your attention to this case. We kindly ask to be informed accordingly with regard to the actions from your side.

The coalition of NGOs for the protection of Vjosa-Narta:

Albanian Society for the Protection of Birds and Mammals

Bulgarian Society for the Protection of Birds

Center for Environment, Bosnia and Herzegovina

Centre for Study and Protection of Birds (CZIP), Montenegro

Institute for Nature Conservation in Albania

Lets Do It Peja, Kosovo

Protection and Preservation of Natural Environment in Albania

Society for the Protection of Prespa (SPP), Greece 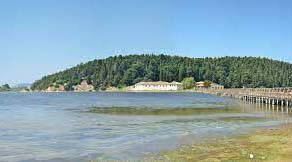